I decided to upgrade my ageing laptop that I’ve had for over five years. It still does a good job but with the insane state of the JavaScript development tooling today it was struggling. It will still have some useful tasks to do, much like my old MacBook Pro that’s over a decade old and still going.

I did a bunch of research and decided to go for the new Dell XPS 13 Developer Edition. I maxed-out the specs and got it to ship with Ubuntu Linux rather than the default option of Windows 10. This makes it slightly cheaper and, as I want to use Linux anyway, it saves an install too.

The hardware is great and very light / portable. Ports wise, it has three USB-C ports, a 3.5mm headphone jack, a micro SD card reader and that’s it. It also has a hardware battery level indicator, which is a nice touch. However, there is no convenient indication of if the machine is off, on or sleeping when the lid is closed. The light on the front doesn’t provide much feedback apart from low battery or charging.

In many ways it is similar to a MacBook, only significantly cheaper for the same spec. The trackpad is almost as good as an Apple one (although my palm now interferes while typing, after an update) and the battery life was great (read on). It’s tough to open with one hand but that’s not a big deal.

I really like the USB-C standard for power and it will only be a matter of time before peripherals catch up. The laptop ships with a USB-C charger and a USB-C to USB-A adaptor. However, if you use an external monitor then you will need to get a dock or upgrade.

The dock options are somewhat complex depending on the resolution that you want to drive and the refresh rate. I won’t go in to it here but you should read up on the differences between DisplayPort and ThunderBolt before making a purchase.

The laptop comes with Ubuntu 16.04 pre-installed and everything just works. It is easy to upgrade to 18.04.1 via the built-in software update and it didn’t appear to break anything in the process, apart from the power management and battery life (a serious regression that may be due to new firmware rather than the OS).

One poorly thought through “feature” is that when you first turn the laptop on it plays a loud video that can’t be stopped, paused or muted. Keep that in mind when you choose where to un-box.

Be careful not to set the screen scaling incorrectly if on 16. This is fixed on 18 but previously it was easy to make the GUI unusable, requiring a CLI fix. You will probably want to run at 2x scale if you go for the 4K touch display.

The trackpad, sound, wireless and other hardware all work well, as you would expect for officially supported kit. Multi-touch two finger right-clicking and scrolling work fine but after an update it occasionally interferes while typing. The webcam is below the screen but I don’t use this and just tape over it.

Ubuntu is a pleasant OS to use and comes with many useful pieces of software pre-installed, including Chromium and LibreOffice. You can obvious install other software, such as VS Code and Firefox, and this is very easy with the package manager, which also keeps them updated.

The new night light feature of Ubuntu 18.04 is a good addition. It’s easy on your eyes and similar to f.lux, but without all the annoying updates.

Power management can be inconsistent on 18 with the latest firmware. I had no issues with 16 but after updating I’ve on many occasions come back to a warm laptop, with a completely flat battery. It appears that shutting the lid doesn’t always keep the laptop asleep, which can obviously be quite annoying if you don’t have a charger on you and a socket nearby. There is now another firmware patch so I’ll see if that fixes the power and trackpad issues but the early signs are not promising. 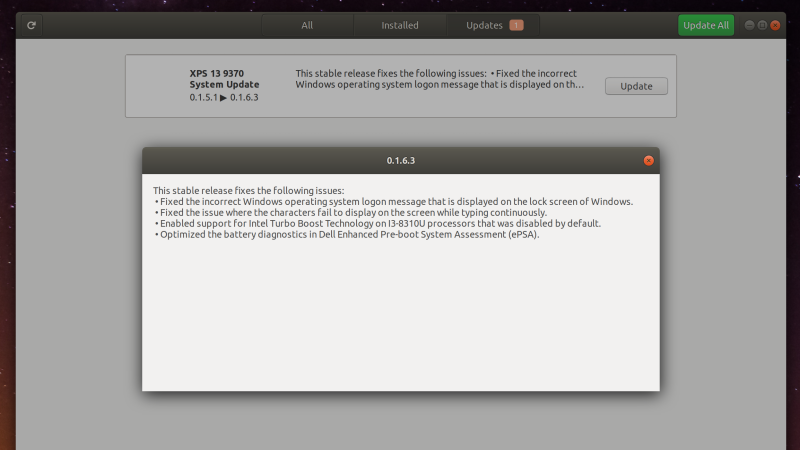 As an aside, if you attempt a firmware update with a low battery (even if plugged in) then it will fail but not tell you why. On a full charge it should work fine.

If ordering from Dell it is best to go for the consumer site rather than business otherwise you can’t get the basic cheaper warranty. I’ve be told you can call for a discount on a business account but who has time for that.

Even so, you will probably get an unsolicited sales call from Dell a few months later. I’m pretty sure this is against GDPR rules, particularly if the number is registered with the TPS. If this happens to you then may wish to let the ICO and Ofcom know.