The moral of this story is don’t update your mobile apps. Turn off auto-update and only manually update if apps stop working, if you really want a new feature or if there is a security patch. Always read the release notes and if what’s new is only performance improvements or bug fixes then abstain, as the opposite may in fact be true.

As I touched upon at the end of the third post in my climate change series, Netflix pushed an update to their Android app that results in it draining the battery a lot on my (admittedly fairly old) phone, even when the app is not running. I’m not sure what it’s doing but the phone regularly gets hot to the touch and I need to force stop the Netflix app, which hasn’t even been in use. 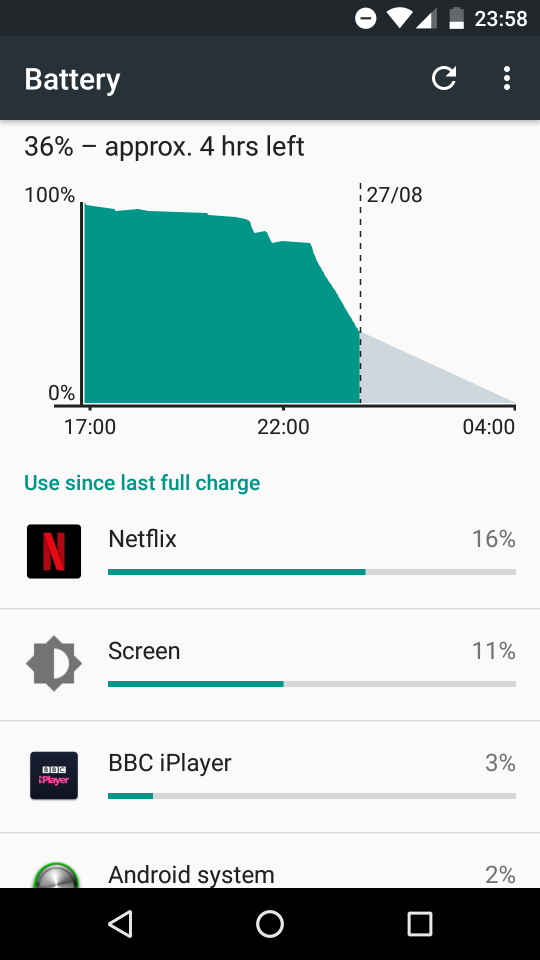 This screenshot was taken after watching, you guessed it, iPlayer.

The battery draining is particularly bad when somebody else is streaming to the Chromecast. This can be alleviated by blocking notifications from the app but that is inconvenient when I’m using it. It’s not just when on WiFi so it must be doing some tight infinite loops in the background.

Even after being killed it will come back to life and start sucking again without being opened, like an un-dead monster. Maybe they are farming out their video transcoding or mining Bitcoin (other crypto-currencies are available) but it’s more likely that this is just sloppy programming and lazy testing.

You would think that it would be in Netflix’s (and Google’s) best interest to support as many users as possible. After all, WhatsApp reportedly got popular in part due to support for low-power phones that are common in developing countries. Although since the Facebook acquisition the focus has been a bit… different.

I could understand (although not condone) this practice if their business model was selling new hardware every year like Samsung or Apple. For example, it was discovered that iPhones were being artificially throttled after a software update, supposedly to save battery.

What is the environmental impact of these issues? I don’t mean just the power consumed directly but the resources used manufacturing new devices when people feel compelled to upgrade? Why can’t we aspire for longevity, extended support and devices that are easy to repair?

Perhaps this is just planned obsolescence, but we’re not de-orbiting a space-station here and we can choose to change this. We can keep our tech for longer and as technologists we can support our software on older devices for longer. We can make our apps more efficient and consume fewer resources. These small savings add up when scaled out and we also get the added benefit of higher performance.

One way that you can extend the life of your smartphone is by simply using it less and placing fewer demands on it. This also means that your phone places fewer demands on you, and you can go back to owning it rather than the other way around. I have lots of tips on how to achieve this but they can wait for a later post. However, you can start by turning off auto-play.

As another example of waste, VSTS was recently renamed to Azure DevOps and Microsoft pushed out another update for Visual Studio 2017. The release notes appear to indicate that the name change was the only thing in the release and it is over 300MB. What is the environmental impact of rolling this out to the world and couldn’t they have waited to bundle it up with some real features?

How To Get Your Life Back From Your Smartphone