The latest Winter Olympic Games are almost over and I’ve enjoyed watching them. I prefer the Winter Games as the sports are simply crazier.

I love a good ‘lympics but I think I’ve particularly liked watching this one as there is hardly any advertising, particularly when watching it on the BBC. Usually there are loads of advertising banners etc. for alpine events.

The last few host cities have certainly been controversial (although nowhere near as outrageous as the FIFA World Cup this year). However, you can’t claim that China hasn’t manufactured a decent spectacle and they’ve built most of the infrastructure from scratch.

This is exemplified by the Big Air in “downtown” Beijing. From Big Air at the Beijing Olympics (Reuters):

Big Air Shougang in the Shijingshan District of Beijing has been built to host the Big Air events. Located in a former steel mill, it is the world’s first permanent Big Air venue and the only snow event venue in downtown Beijing.

I’m not sure why this is called “downtown”. It’s actually 15 miles (>20 km) West of the city centre on the outskirts of the city, exactly where you might expect to find an industrial zone.1

Back Down To Earth

I don’t think the minimal spectators take much away and it’s certainly better to watch the big air remotely than fly more people in than necessary. That said, I’m excited for the next games in Milano and a big benefit of the location is that most of the infrastructure is already in place. Torino was great in 2006 (although I do have a soft spot for that as I worked out there and have been down the terrifying bobsleigh track). Maybe I’ll drive my EV or get the train down there in a few years to go and watch.

If you are reasonably local then the Olympics are a great spectacle to see in person. I still think London 2012 was amazing and marked the pinnacle of progress for this country. Unfortunately it’s been downhill for the last decade, let’s hope that wasn’t the highest-water mark.

I’ve been flight free for almost three years now but obviously this has been easier than usual. As we all know, flights are not just bad for the environment but are of course the main way that global diseases spread. Planes are also very loud and (most) airports simply suck. It’s not much fun trying to navigate the captive market duty free maze after the security theatre.2

I think airports are not the problem but they are a very good example of it. The problem is excessive consumption and the rampant advertising that drives it.

I think nothing manages to sum up how fucked we are better than this image. There is a lot going on here. 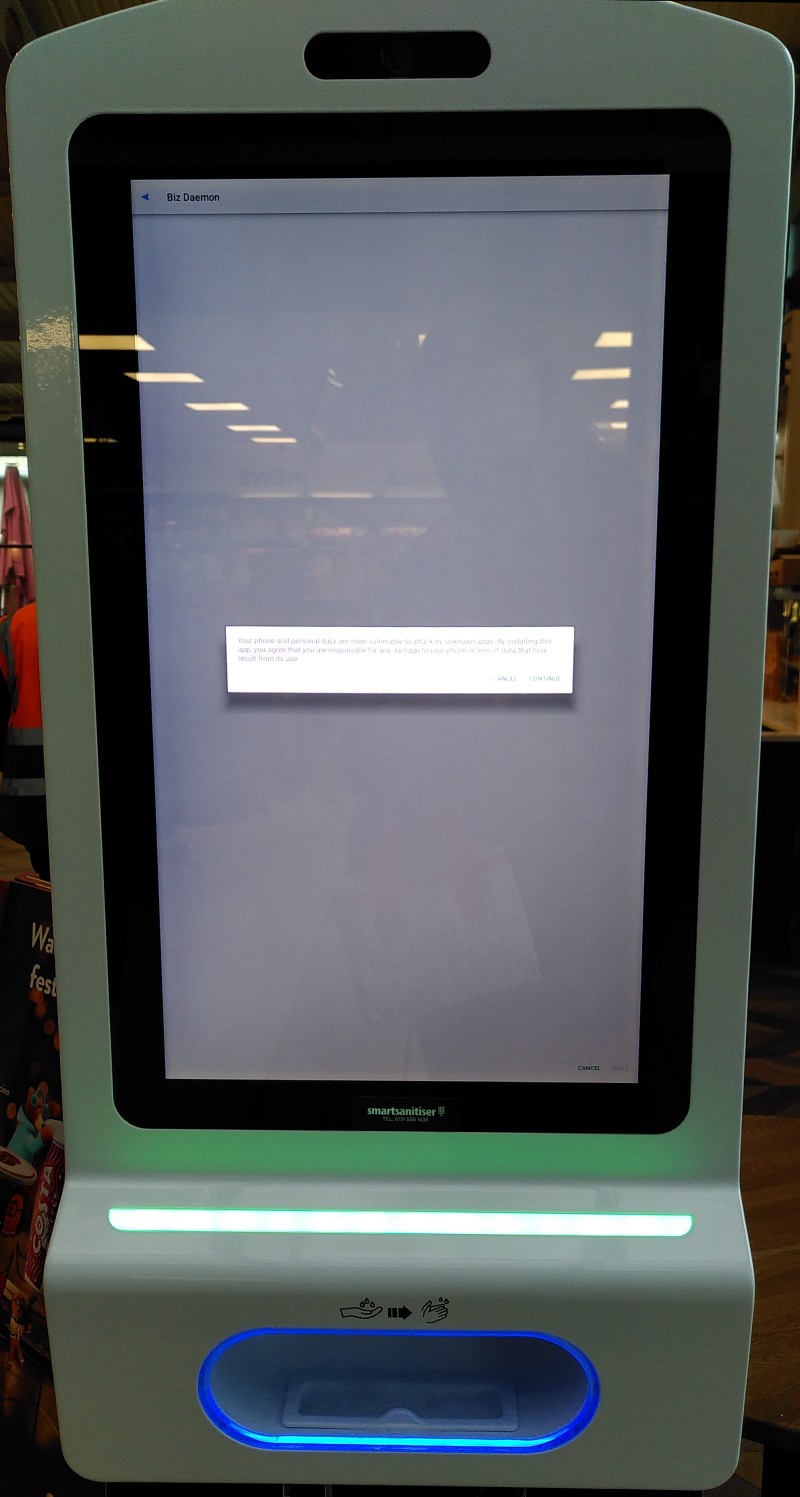 This is a broken (Android unknown app warning) advertising hand sanitiser that I spotted at a motorway services. I’ve stopped updating shit signage as there was just too much broken crap out there but this one deserves a special mention.

The ones that were “working” were showing advertisements promoting flying to destinations that you weren’t even allowed to visit at the time. I hope the irony would not be lost on all the people involved in creating this monstrosity but I’m not confident.

In the words of Talking Heads, how did we get here?

You’re accosted while cleaning your hands and even while using the toilet (talk about taking the Raspberry Piss). 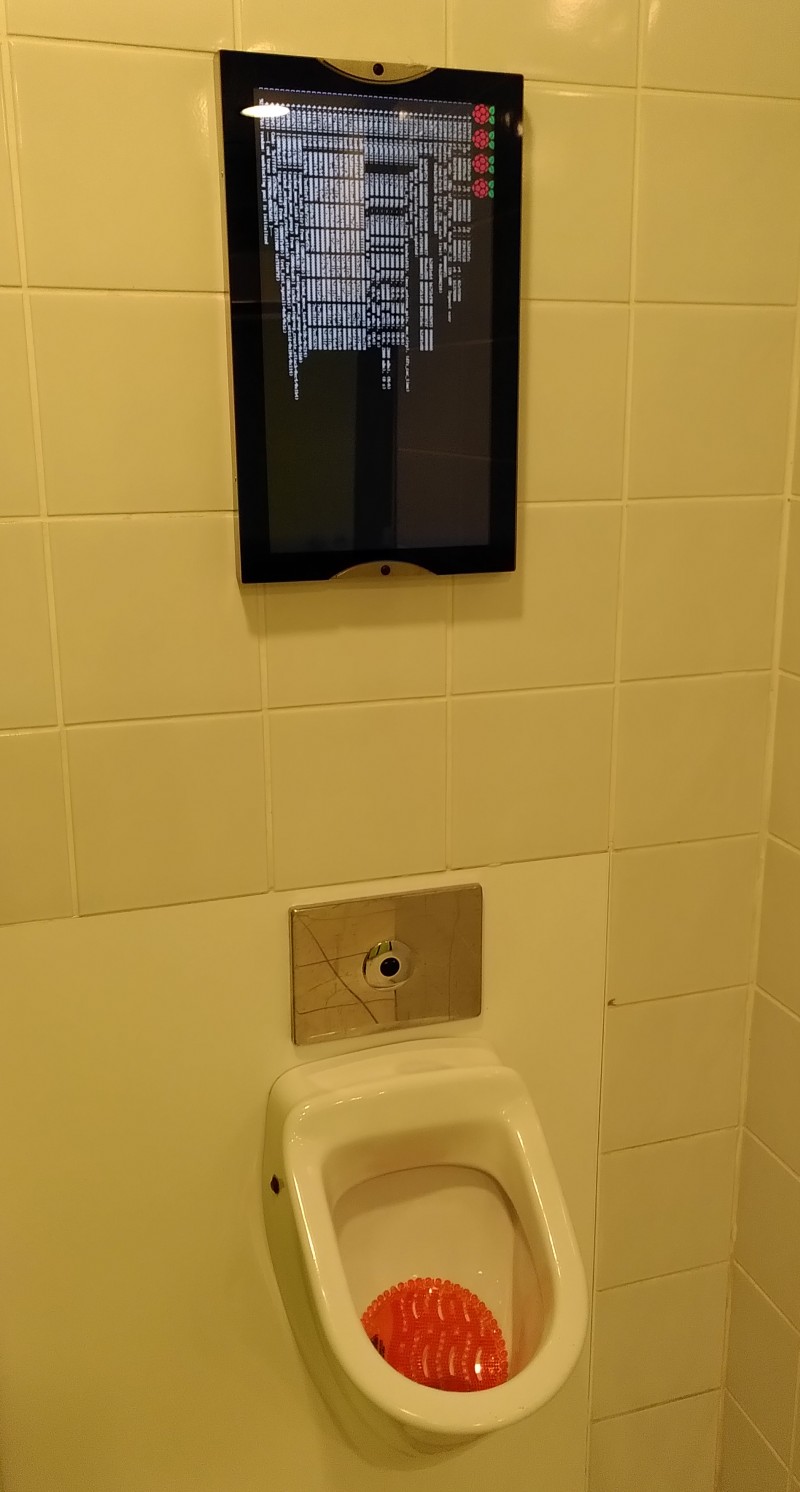 How did this become acceptable? If this was an actual person trying to sell you something at this moment I think most people would punch them in the face.

The advertising technology industry and all the tracking that goes along with it is extractive and a blight on society that needs to be cured. If we could only move it more towards content marketing where you actually get something in return, rather than simply abusing eyeballs and attention.

Raspberry Pis are not only used for evil, you can take a small step by running a Pi-hole. Polarising sunglasses can help while out and about as they often block large LCD screens mounted in the unusual portrait orientation.

However technical solutions only treat the symptoms, what we really need is legislation to restrict advertising in public spaces (particularly where children and other vulnerable individuals are present). Grenoble (a beautiful city at the foot of the French Alps) has removed a lot of advertising, so this is achievable. Perhaps more protest and pressure is required. A ban on animated advertising (“digital-out-of-home advertising”) or even only allowing advertising of the thing that the sign is attached to would be very welcome.

Maybe it’s the natural beauty of the mountains that gets people to realise how ugly advertising is. I certainly like watching people do crazy sports in them while not being distracted by garish displays promoting overconsumption.

An Influx of Curling