Update: There is a follow-up post to this one here.

There are lots of new challenger banks appearing on the market. It’s been a bit of a slow start, mainly due to how long it takes to get a banking license in the UK. For example, Monzo started with a pre-paid Mastercard but are now a full bank (many years later) and tide are still just a pre-paid card and not a full business account.

Once through the regulatory pipework, this trickle may become a torrent and pose a major threat to the established banks with their lumbering legacy tech, low agility and paralysing political bureaucracy. Time will tell.

Starling bank are an app-based (full) bank that has an attractive offering. It’s impressively quick and simple to set up an account, especially when you’re used to paper forms and branch visits.

Some of the things that set Starling apart, at least on paper, are:

Up Close and Personal

The process to get a new user on board is pretty slick considering the Know Your Customer (KYC) and Anti Money Laundering (AML) regulations required. You simply take a picture of your ID documents then record a short video reading a one line script (that varies per user, I assume to be harder to forge). The phone number verification is via SMS that could be more automated, but perhaps they didn’t want to ask for too many permissions? 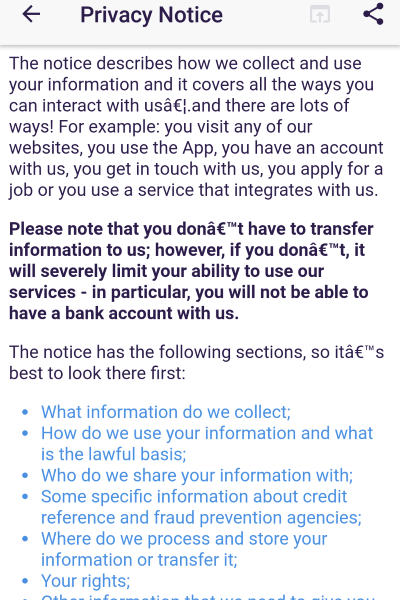 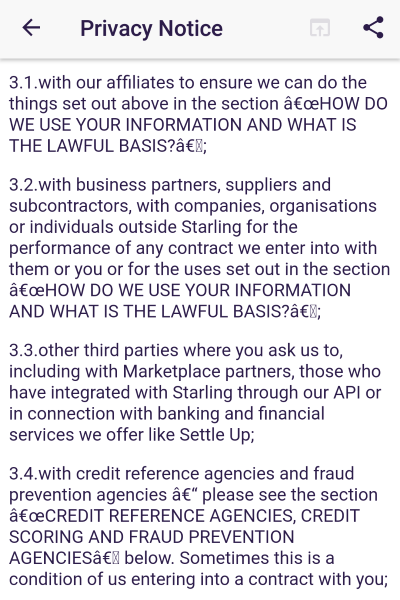 Once you’re set up then the card arrives in the post a couple of days later with the PIN pre-set from the app. This can (and should) be different to the PIN used to access the app. The unique thing about the card is it is portrait on the front and all the information is on the back.

Once you have been approved for a personal account then you can open a joint account or some business accounts too. You can set pictures for these in the app to easily tell them apart. 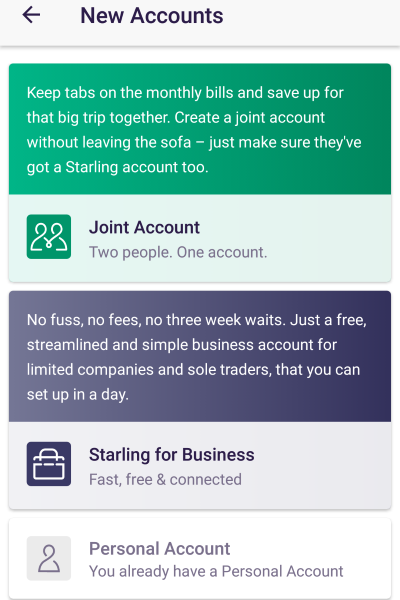 You can have multiple business accounts as long as you are the only Person of Significant Control (PSC). The process is fairly automated but Starling will message you in-app if they require any more information. The customer service messaging can be a bit laggy on a poor connection and I suspect this is because it’s a web view rather than a native app feature.

The app uses the Companies House API to pull info on your business using the company name or number. You also need to provide a company website or LinkedIn profile.

Once set up you will get a black debit card with business written on the front in the post a couple of days later. The different card is a well-considered touch as it makes it easy to differentiate it from your personal card.

There is also a developer API and it integrates with accounting software like Xero. However, it doesn’t (at the time of writing) integrate with FreeAgent and I fear this is because FreeAgent is now owed by RBS. The only bank integrations added since the RBS acquisition are for RBS and NatWest (owned by RBS). 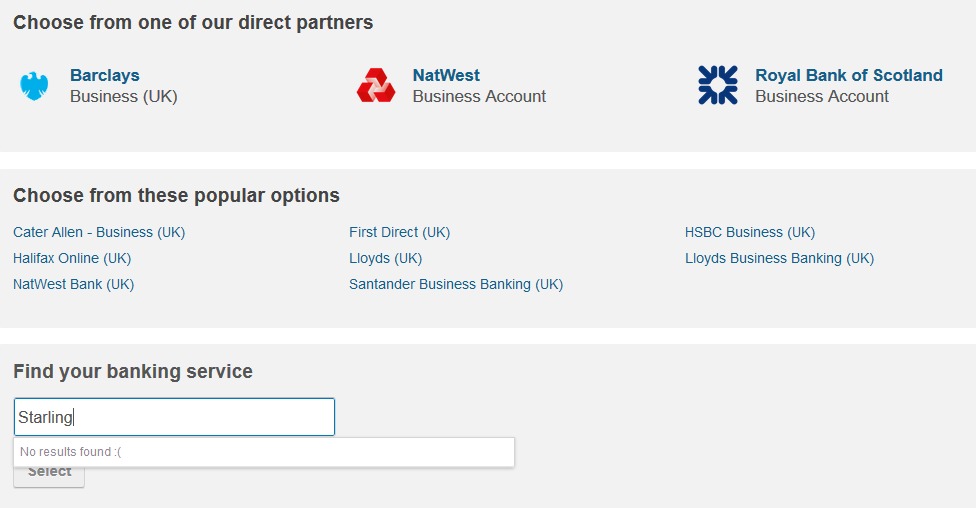 A tweet indicates that FreeAgent integration is planned and this may well use a push model with the FreeAgent API (much like the tide integration appears to). Hopefully this will mean it is real time, unlike the overnight batch process of the old bank integrations that can take days before a transaction shows up.

Monzo are also looking to provide a business account, paid for by an RBS fund. We’ll have to wait and see if this happens or if big finance succeed in quelling the disruptive upstarts.

The joint account setup is really easy but you need to be in the same physical location as the other party. On Android, it uses the Nearby service to pair your accounts using ultrasonic audio between your phones.

This is all very slick. Last time I opened a joint account with a high street bank we had to visit a branch and they still froze all of our accounts as soon as we left!

You can only have one joint account and the account image is the same for both parties. In fact it automatically updates for both once set by either of you.

The card has the same colour as the personal card and looks identical from the front. It says joint instead of the account number on the back but that doesn’t make it easy to identify quickly. Sharpie to the rescue again. 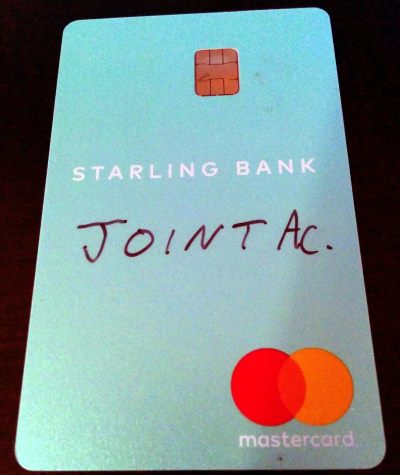 Be careful when transferring money into your new account. Your old bank may freeze your account if you send too much in one go, true story (and yes it’s the same bank as above). It may be better to use the current account switching service, which will automatically reroute any payments for a few years after.

The one big oversight is that there doesn’t appear to be an easy way to move money between your different Starling accounts. This either doesn’t exist or is not discoverable. You have to set yourself up as a payee, which is difficult when the details aren’t on the card and are on another screen in the app.

Edit: This is now fixed, although it was buggy to start with. See this post for more details.

The cards are all debit cards and not credit cards. This can cause a problem paying for some things if the supplier only accepts credit cards for foreign banks. This also means that you don’t have as much consumer protection as with credit cards if things go wrong. It’s a good idea to have a backup credit card from a different bank too.

The most attractive thing to me as a software engineer is the API. There are lots of cool apps you could build on top of this platform. Their marketplace and Banking as a Service (BaaS) look very interesting.

However, Starling did shut down its community forum but that looked more customer focussed than developer focussed. I’ve not had a chance to play with the API yet but the docs look good.

Play Services and Your Typing Experience