Following on from my graph of the summer heat wave that afflicted large parts of Europe, I thought I’d expand on the increasingly extreme swings in our famously changeable British weather and the implications for our energy infrastructure.

The difference in the conditions occurring recently is the scale. For example, heat waves from the last century were more localised but recent ones have afflicted the whole continent. This July was confirmed as the hottest month on record, worldwide but you can also find out how much warmer your city is. However, hotter doesn’t mean more pleasant, it just means more extreme events. We can expect not only hotter heat waves but also stronger storms, more rain and higher winds.

The small silver lining is that the extra energy we are trapping in our planet’s atmosphere means that there is more available to extract. This can help us condemn fossil fuels, the source of all the trouble, to the history books.

Will You Start the Fans Please

In the UK that means wind power and we have recently had some very low carbon generation. We’ve even had weather warnings for strong winds leading to event cancellations but the government still can’t see that far more onshore wind (the cheapest form of power) is needed. Barriers to installing renewable energy are not compatible with the declared climate emergency. 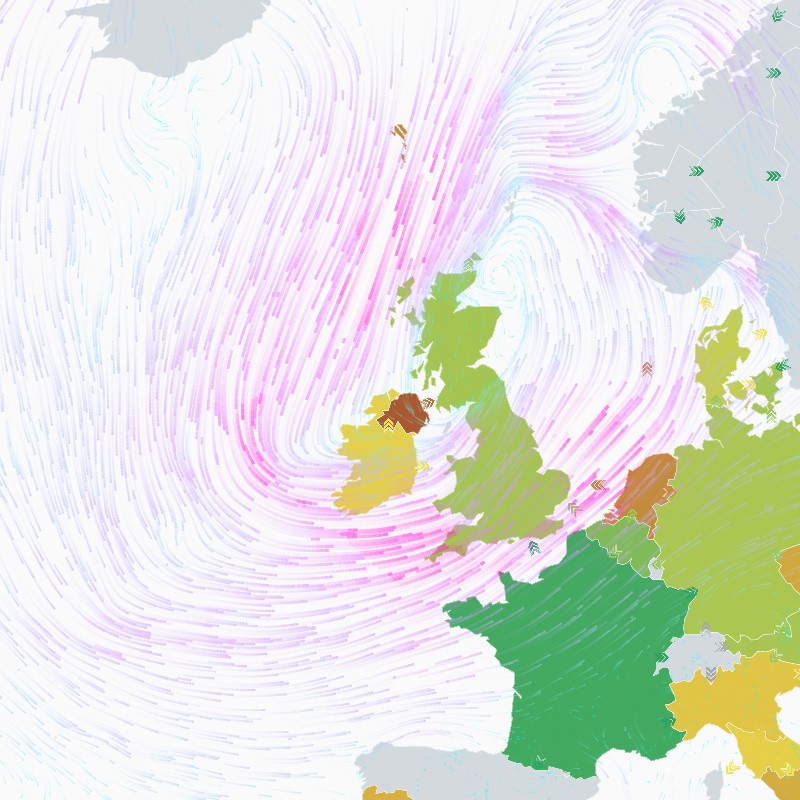 No doubt, opponents of wind power with vested antique interests will attempt to blame the recent power cuts on renewables. However, they were triggered by a gas power station going offline first. It also looks like the root cause was due to lightning strikes, which will only get more frequent. Climate change means more thunderstorms and stronger ones with greater energy.

We need to be more resilient with additional buffers and storage (batteries etc.). There are also trials to inject renewable energy directly into the railways, which were badly affected by the cuts (partly due to the new “high-tech” trains not recovering quickly from onboard computer reboots).

The power cuts are not as obvious from the data as you may think, given the news reporting. The following graph shows it as a slight dip in demand, which is a result of the load shedding (i.e. mandatory demand response).

You can see that the biggest drop in generation is from gas, much greater than the wind loss (which is naturally variable and so typically expected). The gas plant was run by RWE, who are also responsible for massive destruction in Western Germany from digging up and burning a crazy amount of dirty coal.

You can see the pumped storage (e.g. Cruachan and Dinorwig) attempting and failing to compensate for the loss. It looks like all the imports were already at maximum so our links to continental Europe couldn’t help. We’ll have to wait for full report next month to read all the details.

This data is exposed by Electric Insights, a good way of exploring historical generation statistics in GB. It also shows us that this past weekend, we had very low carbon generation, well below 50g/kWh of CO2. 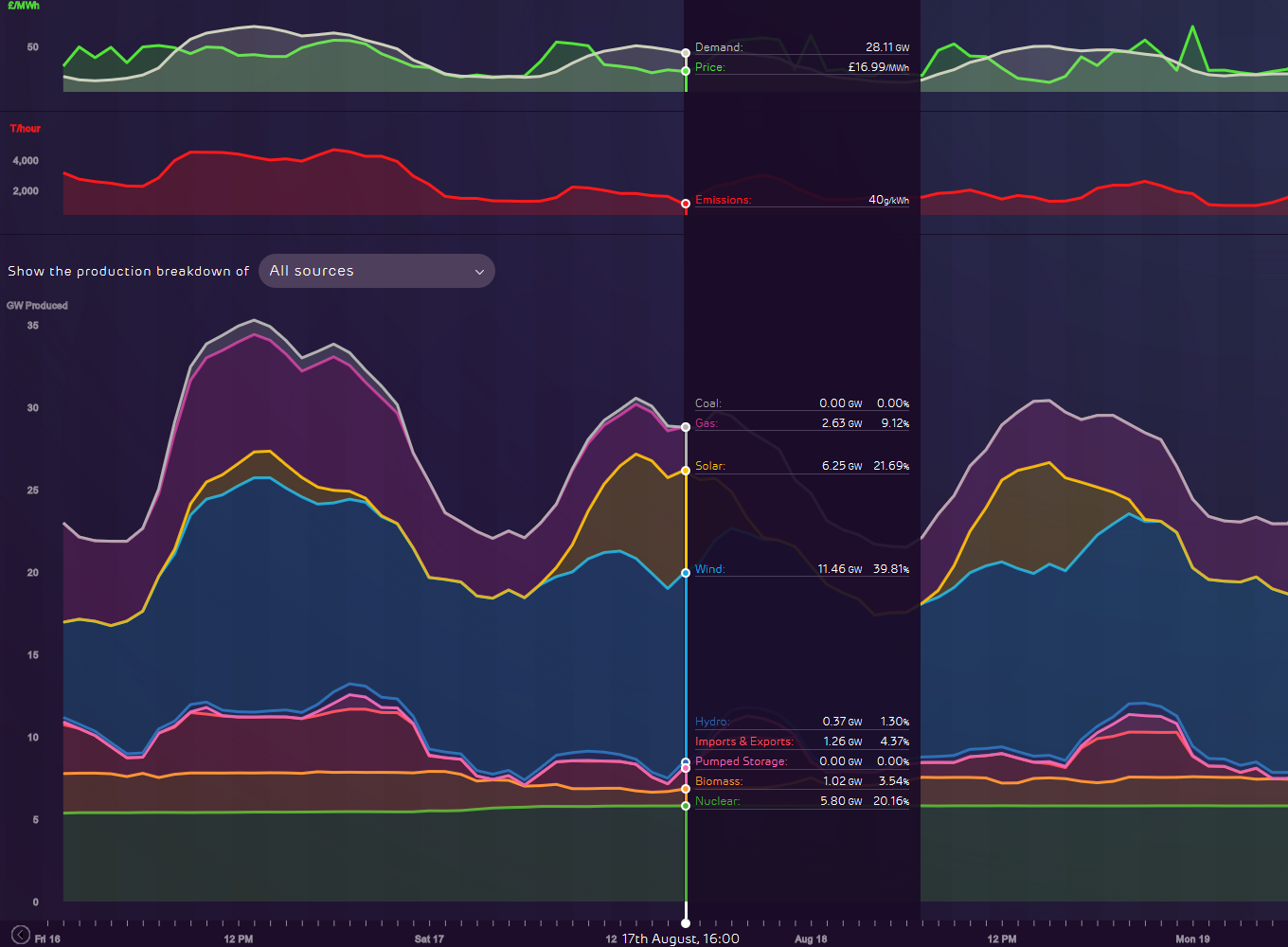 This data is good for retrospection but for prediction and a regional breakdown the Carbon Intensity API is better suited. 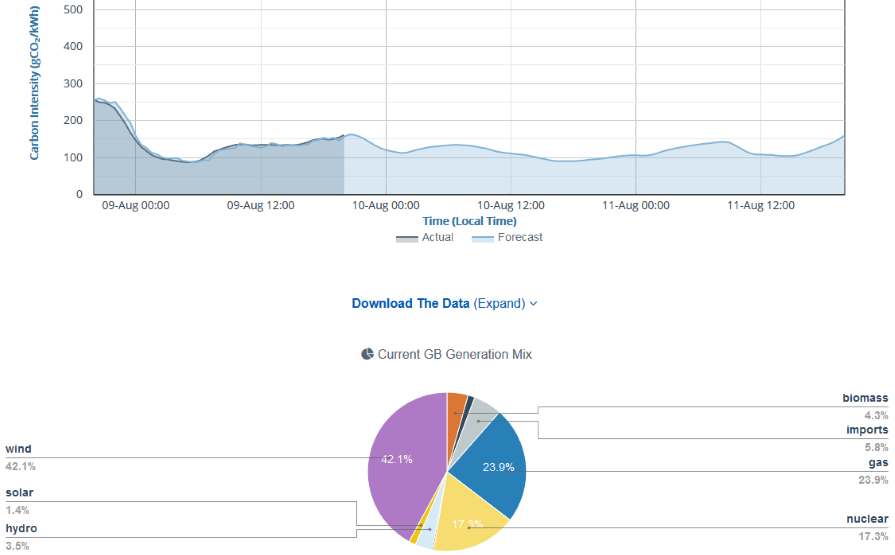 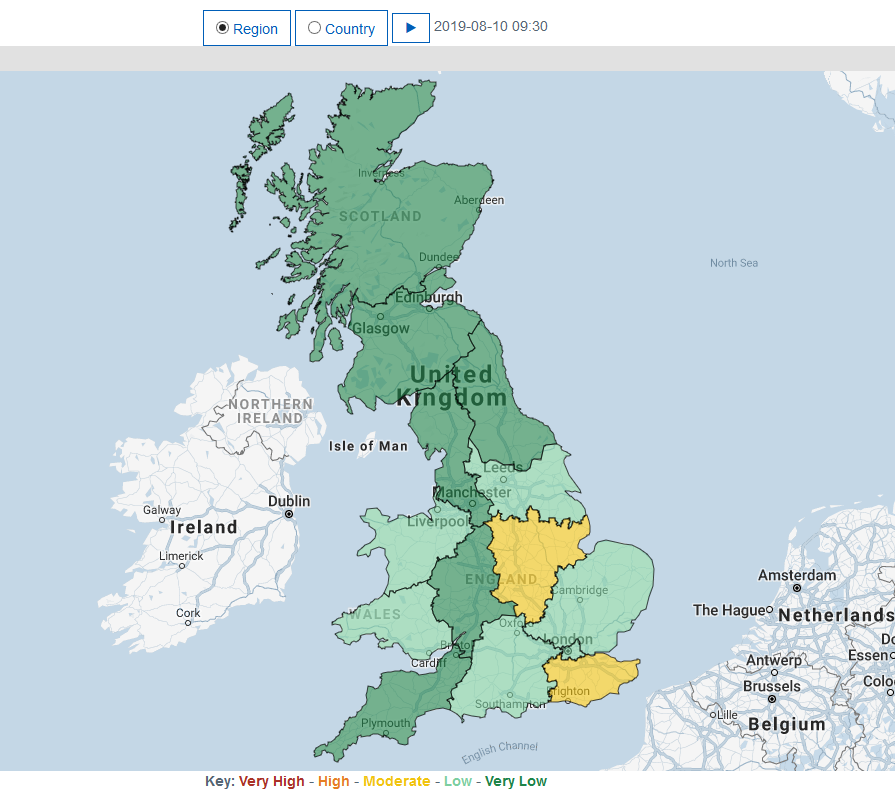 Electricity is not like other commodities in that demand must match supply at every moment. One of the interesting things you may notice in the insights is that the price fluctuates a lot. Occasionally, the price is even negative, which means you can be paid to draw power.

Traditional domestic billing can’t account for this price variation. The closest was Economy 7, which assumed power was cheaper at night due to the lower demand. However, these days it can be cheaper and lower carbon in the middle of the day due to the large free supply from the sun and wind.

The Only Way Is UPS

Home batteries and electric Vehicle to Grid (V2G) systems not only provide self-sufficiency and resilient against outages (UPS) but with smart meters a great opportunity to turn a profit. Combined with micro-generation from rooftop solar and domestic wind turbines an investment can pay itself back without subsidies. There are also opportunities for DC systems to reduce the ratings needed for inverters and rectifiers but that can wait for another post.

There is some concern that electric vehicles will put extra strain on the grid. However, with V2G they can be a solution rather than a problem. People are also often ignorant of the huge amount of energy used just for refining crude oil into fuel. As demand for petrol and diesel falls this energy will be available to charge cars.

One of the ways to take advantage of home battery storage is to switch to an innovative challenger energy company such as Ecotricity, bulb, OVO or Octopus. For example, OVO have a V2G trial with Nissan Leafs and Octopus have a smart agile outgoing octopus tariff, where you get paid to export when power is expensive and can charge when it’s cheap (they don’t bill you if you export when the price is negative though). You can use this referral link to get £50 free credit when you switch to Octopus Energy.

Obviously you don’t need panels or a battery to switch suppliers, maybe you just want to feel good about using 100% renewable electricity and carbon offset gas. Some of these use RECs rather than buying green power but that is still better than nothing (e.g. a standard tariff from a large supplier). These startups are often cheaper than the lumbering incumbents of the big six too. Yes, you can save the planet and save money. It’s not a sacrifice, it’s better.

However, the government like to make things needlessly challenging. You can read the response to this petition to see how complex the new VAT rules for home generation will be. They blame this increase in tax on EU rules as if there’s not something happening in October (when this VAT change comes in) that means those wouldn’t be an issue.

Perhaps this is just the last chance for a tax hike that can be blamed on an outside institution and they managed to sneak it in just in time. Their true motivations will be revealed if they choose to scrap the VAT as soon as EU rules don’t apply. Now that, and ending the onshore wind “ban”, would demonstrate strong leadership on the climate emergency. Will they choose to be courageous on the climate crisis or be condemned as complicit cowards?