Update: I’ve changed mobile network providers again. You can read more about that here, where you’ll also find a referral link for a free month and a £10 Amazon voucher.

I have a confession to make. Until pretty recently I tolerated the annoyance of my virginity and I have to admit that I didn’t address it as soon as I should have. In my defence I’d been busy, but deep down I knew that I’d stuck with Virgin for way too long. However, I’ve since ditched them for both my mobile and home broadband1; here’s why.

I’m a strong believer in net neutrality. That is, the idea that all data online should be treated equally by a common carrier and not discriminated against on a per-company basis. Unfortunately, Virgin don’t have the same ideals, which is why I’m no longer a customer.

If you browse the Twitter mobile site on your Virgin Mobile 4G connection (in the UK) then you get a delightful banner taking up screen real estate informing you that Twitter is data free. In other words, it doesn’t count towards you data allowance. 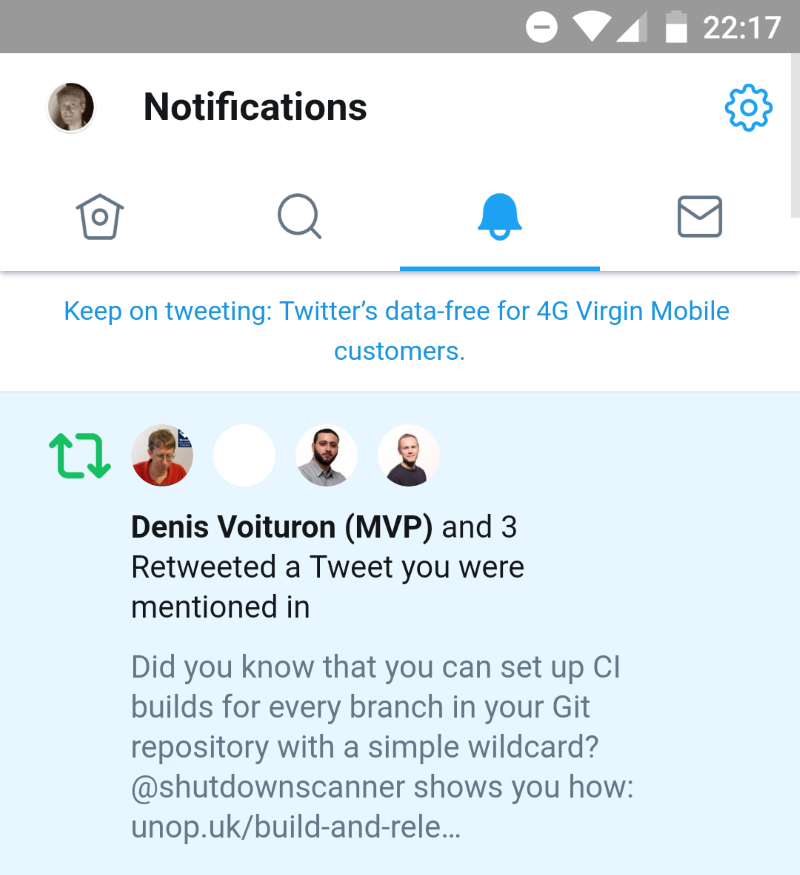 There is also a full-screen modal that appears when you try to follow a link away from Twitter. Both of these get cached and still appear when you switch to WiFi! 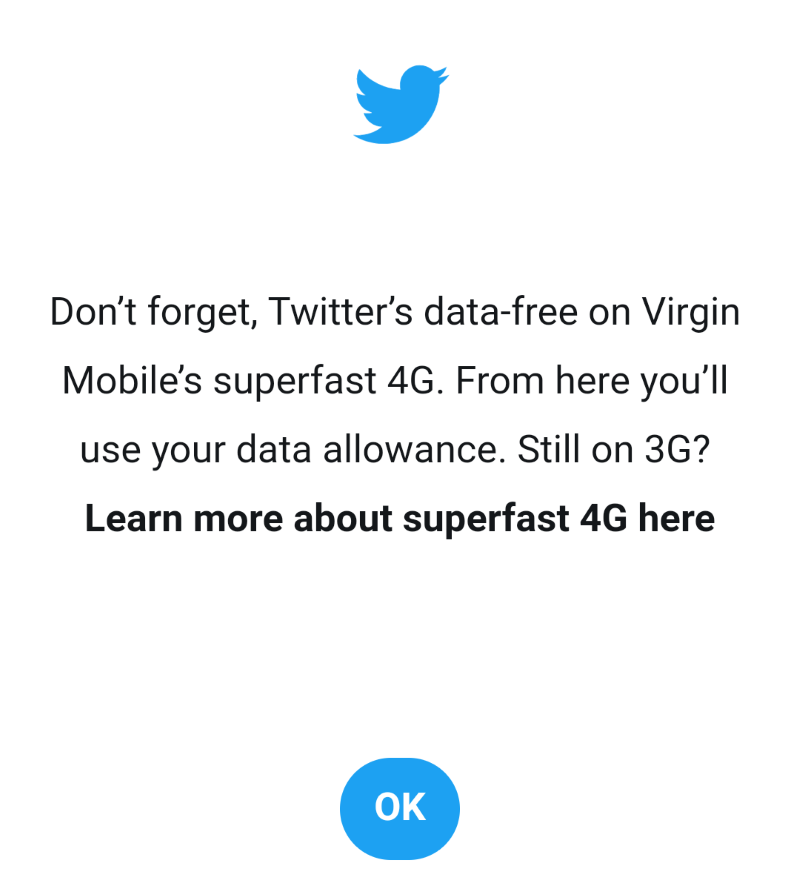 This behaviour gives an advantage to the incumbent (Twitter) and impedes other competitors. This must have been agreed with Twitter (potentially with large sums of money changing hands) as Virgin would not be able to inject this banner into the Twitter site on their own.

So I’ve changed network providers and, although I pay slightly more, I’m much happier with the new operator. As a bonus, EU data roaming actually works for more than a few minutes, but we’ll have to wait and see for how many more years this perk remains.

I’m also moving away from Twitter and towards embracing the IndieWeb. These days I mainly use Twitter for syndication (POSSE) and I very rarely use it directly.

I believe it’s important to stick to your principles so I began the process of switching my home internet provider too. I don’t have any direct evidence of preferential packet treatment on my cable but Virgin Media do have a nasty habit of repeated price rises and I wanted to balance out the higher cost of my mobile plan.

One of the benefits of a coax cable internet connection is that you can get fibre (FTTC VDSL) installed in parallel and avoid any downtime or interruption in connectivity. 4G would normally be a good fall-back but with low mobile data allowances this is a bit limiting. Small data allowances are one way telecom companies keep people on landlines.

I got a new provider installed for a similar speed but at a significantly lower cost (including line rental). The download speed was a little lower but it is plenty fast enough for streaming live video and it feels the same to use. 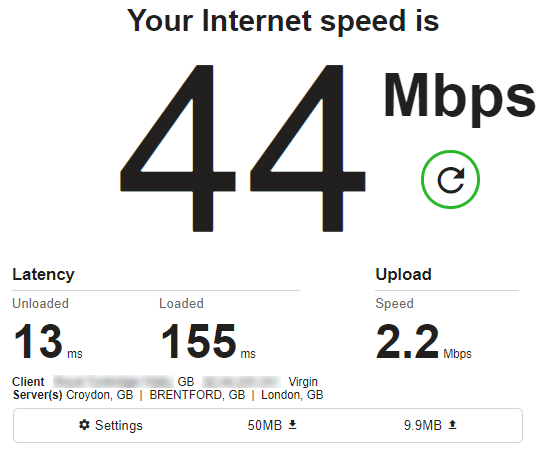 When it was all set up I tested everything and found not only was the actual download speed closer to the advertised value but we now have a much better upload speed. As a further bonus we have a lower latency and the new ISP even supports IPv6. A great improvement on all the often ignored yet important metrics. 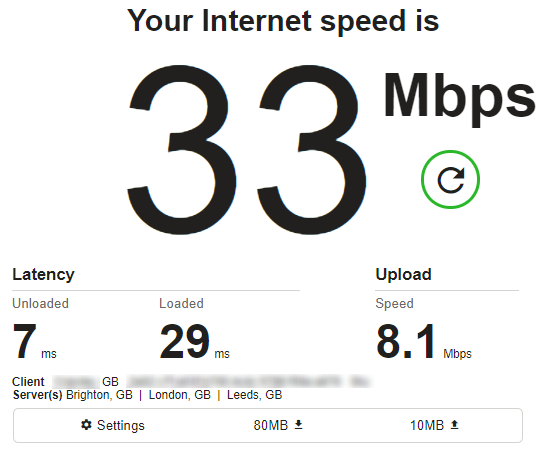 It’s Not Me It’s You

Once everything was switched over and bedded-in with no problems I called Virgin to cancel and got put through to retentions. We were paying almost £35/month after repeated small price increases, which I strongly suspect is a deliberate tactic. They immediately offered to drop this to £27 but I turned this down. Over the next few days they repeatedly pestered me trying to call with a better offer. They offered £22 but my new provider is still cheaper. They even asked if I was in the 14 day contract cooling-off period.

If you’re willing to put the effort in then you can get some big discounts but like many markets you need to switch for the best deals and loyal customers are penalised. The same is true for energy, jobs and banking. These sectors seem to think that loyalty is only a virtuous quality in dogs.

You need 30 days notice to end your agreement with Virgin Media, even when out of contract. They don’t simply end the current period like other providers and they also bill in advance, so keep this in mind with your planning.

Virgin also ask that you return your cable modem hub. I’m all for recycling waste electronics but I suspect this is more likely to be so that hacked cable boxes don’t end up on the black market. I’ve been told that it is trivially easy to steal cable services, although I’ve obviously never looked into it further.

To send the kit back, they post you two plastic bags, inside yet another plastic bag. They also send you a terminator cap and a tiny plastic spanner, although the instructions are pretty poor and don’t mention screwing. This takes me back to the bad old days of cheap 10BASE2 networking.

Virgin will then instruct you to take your package to a local shop, which in my case didn’t exist. A poor experience all round and it will reduce the likelihood of me using them again, but I guess it saves on their postage costs.